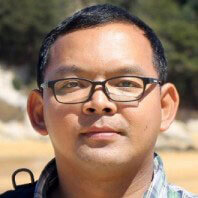 Phalla is a very good friend of Roland and also runs his own development aid organisation (BBC). BBC is based in Pursat and is also a partner organisation of the Kleine Hilfsaktion e.V.. Phalla also knows Cambodia and its peculiarities like no other. He speaks English very well and is a sympathizer, as he says in his book. Fun and a good mood are guaranteed with him. Phalla is a specialist in improvising and organizes faster than the problems occur. Somehow he always knows someone who knows someone … unlike David and Bong (Bareebo) he not only organises the fundriding tour, he also accompanies them personally as a guide, at least in Cambodia. 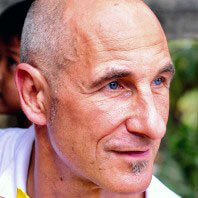 Former motorcycle racer and pillion specialist. He earns his living as an instructor for racer schools, perfection- and safety training and is probably one of the most experienced racing taxi drivers in Europe. As a founding member and managing director of the Kleinen Hilfsaktion e.V.,  he provides concrete, practical and unbureaucratic help to self-help in Cambodia since 2007. Roland Debschütz and Jens Kuck will accompany the two groups of six. Roland has already accomplished the Tour in Nov 2015 together with Jens, Susanna, Bong and Phalla and travels through the south-east of Asia by scooter for 30 years now. 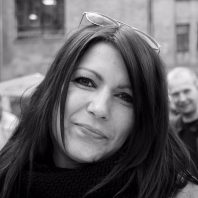 Nadine Urbansky has been working as a project manager for Kleine Hilfsaktion e.V. since Feb 2018. Her South East Asia experience and her social and uncomplicated basic attitude make her invaluably important for the association. She also plays a decisive role on the fundriding tours. As a brilliant co-driver she has already accompanied Roland on five fundriding tours. Not only does she take care of the entire IT appearance before and after the tour, she also  relieves the guides and above all Roland through her well-structured way of working. Having fun, travelling, doing crazy things and helping as many people as possible is a win-win-win situation for Nadine. The satisfaction of the fundriders proves her right …. 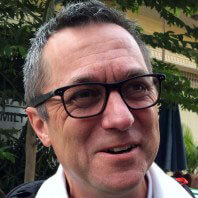 Michael is the second chairman of the Kleine Hilfsaktion and “Old Asia Hare”: Besides many Cambodia trips, he has also travelled to other countries in Southeast Asia with the Kleine Hilfsaktion. Michael was the owner of  Optik Studio Neuss, in which he still works today when he’s not on the other side of the globe. It is therefore hardly surprising that he feels particularly committed to the “Eyesight” project of the Kleine Hilfsaktion. Through the early detection of cataract, he has saved many people from becoming blind. As an excellent travel photographer, he is also the “eye of the tour”. 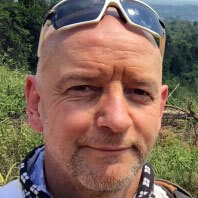 Rolf Externbrink is a long-time companion of the Kleine Hilfsaktion. With his marketing agency springer f3 and their donation initiative opportunities, he and his team support the fundraising activities of the association. Since 2014 he has been to Cambodia three times, visited the projects of the KHA and reported on our blog and social media channels. Also, the Fundriding-Tour 2017 will be presented “live” to domestic screens. He drives a Yamaha classic car (TR1). As an additional qualification, Rolf can refer to his experience as a motorcycle soldier of the 6th armoured infantry division in the years 84/85? 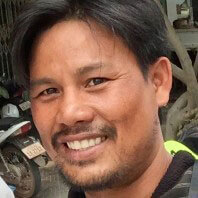 David, whose real name is Sin Kouk, was born in 1981 in a refugee camp in Thailand. Two of his nine siblings died of malaria when his family had returned to Cambodia after the ceasefire with the Khmer Rouge in 1993. David stopped going to school after the 7th grade so that he could work and support his family financially. He married in 2010 but he and his wife have remained childless so far. His wife runs a little greengrocer’s shop close to their rented apartment in Battambang City. The couple dreams of saving enough money to buy their own land, build their own home and start their own business some day.

Dr. Chan Bunna is the director of a hospital in Pursat, Cambodia. He works with many international organizations in Cambodia, including being a medical assistance for a health program for Ärzte ohne Grenzen. He gives first aid courses at hospitals and connects, due to numerous contacts, different work areas and partners in the health service. He has been accompanying the fundriding tour since November 2017. He loves being able to work with different people from different cultures and, in this case, providing medical assistance to the fundrider. 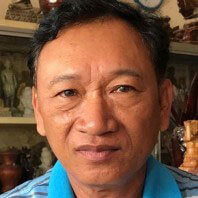 Sok Khonn is “the invisible third” and the driver of our escort vehicle. The luggage is transported in his minivan, a spare scooter together with the day’s meals. As a rule, he usually rides behind the fundrider together with the doc and is therefore always at hand in the event of technical defects. Sok Khonn is a mystery in the sense that you hardly ever heard him speak, but he always appears out of nowhere – exactly the second you need him. We suspect that he has a secret service history 😀